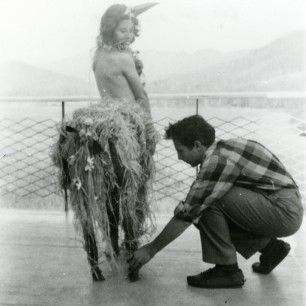 The Black Mountain College was a utopian project played out under the Blue Ridge Mountains in North Carolina. Founded in 1933 by a maverick American academic, it offered an interdisciplinary education with the arts at the heart of the curriculum. The staff were a heady mix of idealistic young Americans and seasoned émigrés from Europe such as the artists Josef and Anni Albers, who brought with them the progressive ideas of the Bauhaus, the renowned German design school.

The Black Mountain story is recounted in Black Mountain College: Experiment in Art. It is a splendid survey of the institution and its legacy. It features artworks by staff and students such as the painter Robert Rauschenberg and composer John Cage. Other significant figures, although less well-known, include the artist Robert de Niro (father of the famous film actor), Charles Olson, writer and the last rector of Black Mountain, and potter Peter Voulkos, who turned a craft into an art form.

The college left its mark on American culture and still resonates today. Indeed, the staff, visiting tutors and alumni read like a who’s who of the avant-garde; the painters Willem de Kooning and Helen Frankenthaler, Japanese potter Shoji Hamada, the writers Anais Nin and Aldous Huxley, choreographer Merce Cunningham, photographers Harry Callahan  and Aaron Siskind, poet and novelist Robert Creeley and the inventor Buckminister Fuller, and one could go on.

Critic and poet Vincent Katz gives an excellent though lengthy overview of the college. He discusses the college’s origins and ethos; student-centred and above all ‘group thinking, cooperative intelligence’ – the antithesis of American individualism.  Other sections look at the impact of the Alberses: Josef wanted ‘to open eyes’ and did with his multi-coloured geometrical abstraction, while Anni set up the highly experimental weaving workshop. Katz examines the ground-breaking collaborative work of Cage, Cunningham and Rauschenberg. He also discusses Buckminster Fuller’s architectural experiments, which led to his famous ‘Geodesic Domes’. After Black Mountain had folded the college’s teaching and spirit continued to inspire, and this is a fine tribute.

Martin Brody, a professor of music at America’s prestigious Wellesley College, charts the musical culture at Black Mountain. This essay requires some knowledge of modern music.  One issue was the need to take on board innovations in European music such as the atonalism of the compositions of Viennese modernist Arnold Schoenberg. The college helped disseminate his ideas in America, holding a Schoenberg festival in 1944.  Brody also discusses how enfant terrible Cage broke down musical conventions with his ‘radical synthesis of theatre, experiments in noise and silence, notation, durational-based formal systems, virtuosity and chance...’. The college’s approach to teaching music also breached gender and racial barriers, appointing African-Americans – a brave thing in rural North Carolina of the 1940s.

Kevin Power examines the genesis and importance of the college’s literary journal Black Mountain Review (1954–7). Edited by Creeley, it provided a platform for his own work, that of Olson and other up and coming writers such as Beat generation icon Jack Kerouac and the poet, critic and early gay rights advocate Robert Duncan. Nonetheless, as with Brody’s essay some familiarity with the field is useful. Power also elucidates the connections between literature and visual art at the college, which were manifest in the pages of Black Mountain Review. For example, Creeley wrote about the Abstract Expressionist painter and Black Mountaineer Franz Kline. Moreover, as Power notes, the artists ‘brought new ways of seeing to the Review’s readers’ as well as a literalness and energy that was echoed in the terse prose and form of Black Mountain writing.

The final essay is an eloquent portrait of Olson, whom Creeley first met in 1954. Olson was a towering presence at Black Mountain in its final years, both intellectually and physically – he was six feet seven inches tall. Yet as Creeley observes, despite his daunting appearance Olson had an uncanny ability to take in people: ‘Olson was not simply overbearing, but curiously including’. Creeley and Olson also supply two of the three poems in the book’s last section; the other is by John Wieners, an ex-student whose ode to his old alma mater in the style of a Blues song evokes its special atmosphere and makes a fitting ending as in this stanza:

I want the mountains, and Lake Eden in my dreams
I want to go back to Black Mountain in the morning
and play ping pong in the cellar
hear Billie Holliday through the woods
drink half a dollar wine till I’m drunk for good.

This book should appeal to anyone interested in not only the modern American art, but also literature, music, dance and communal education.  It is a lavishly illustrated, and includes paintings, sculpture, photography, stage sets and performances along with book jacket design and crafts. There is a good bibliography and index of names. Fascinating archival material includes snapshots of campus life, annotated drafts of poems by Olson, and Cage’s unorthodox scores.

Media credit: Courtesy of the State Archives of North Carolina.