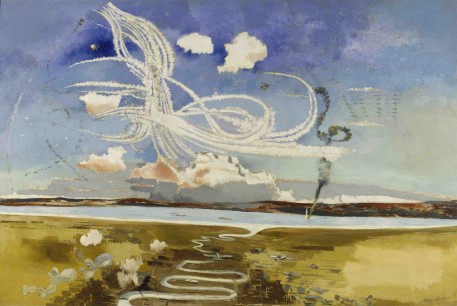 ‘Ever since I can remember ... the combination of certain words or sounds or forms has given me a peculiar pleasure, unlike anything else ....’  Clark’s words from an unpublished text in the Tate Archive.  Because that degree of sensitivity has come to make many critics and academics uncomfortable, there is a tendency to dismiss them as the claim to some sort of elitist status that has to be set aside in the cold light of analysis.  In fact, Clark’s mission was not to set himself apart but to bring as many people as possible into the fold.  This exhibition both shares and includes, but it also does what Clark might have himself wanted: it inspires.

So much for context and it does read as a bit defensive, doesn’t it?  The best advocate is the experience itself.  If you have lately been to the National Gallery or perhaps Tate Modern and been run down by an army of school children (heartening for the cultural health of the country you tell yourself through gritted teeth) this is just the tonic you need to restore your conviction that beauty is tangible and brings its own reward.  The serenity of Tate Britain is the perfect mood-setter, though you might appreciate a gentle chemical enhancement, in which case I can suggest a glass in the unhurried atmosphere of the Tate’s restaurant.  I hesitated about the appropriateness of suggesting alcohol, but bear with me until the end before making a judgement.

This is a big show, so my advice would be to make up your mind that you are coming back,  and that today you are just here to be delighted and have beautiful things restore tranquillity. There is a well-paced narrative running from room to room that might tempt you to cling studiously to the walls and follow the route.  But today just stand in the centre of each room and allow your eye to be caught.  Some objects will not seduce, they will demand.  Such is the Rodin (1849-1917) bronze Eve (1981), with its dramatic self-protecting vulnerability forcing us to reconsider our response to female beauty.  This figure was for The Gates of Hell, but Rodin struggled to get it right and several versions were made, none of which were used and which were later sold.

Other works are more subtle in their means: the very refined terracotta by Aristide Maillol (1861–1944) Bust of Renoir (1907).  Many of us will be familiar with those slightly chunky female nudes by Maillol and formal finesse of this work contrasts delightfully.  It reflects Clark’s interest in the depictions of artists by other artists.  The prestige of such works reminds us that Clark was in the enviable position of having a considerable fortune with which to indulge his good taste.  He also used this financial power in the service of the art community by his considerable efforts as patron.  This led him to a deep and abiding involvement with the Euston Road group of artists, to whom he provided significant financial support, particularly to William Coldstream.  His contacts with the Bells, Graham and Vanessa, certainly seemed to inspire them and one is struck by the exceptionally high quality of such works as Vanessa’s Portrait of Angelica as a Russian Princess (1928) and Graham’s Brunswick Square, London (1940).

Of course, many of the objects are autobiographical in a very personal way – the wistful and strangely affecting portraits of Clark’s wife Jane for example – but what touches closest are the wartime experiences.  These are vividly evoked, and hearing recordings from the wartime Lunchtime Concerts at the National while you explore the exhibits is delightful as well as evocative.  Clark was chairman of the War Artists Advisory Committee and the selection of artists reflects his increasing (though never extensive) tolerance for modernism and abstraction.  Perhaps his core values are best reflected in the works of John Piper shown here: sinister yet beautiful depictions of bombed out buildings, notably Coventry Cathedral.  In case anyone should have the impression that Clark’s privileged lifestyle protected, him there is a poignant gouache by Graham Sutherland of Kenneth Clark’s House in Gray’s Inn Square after Bombing (c.1942). The sombre palate captures wartime privation perfectly.

To return to my comment about the wine.  Clark’s words in the heading express in his own elegant way the fact that, at its best, appreciating art can be a physiological, as well as a cerebral experience, so by definition can be mediated chemically.   It is potentially subject, therefore, to any adjustments to our body chemistry.  Surely acknowledging the potential of a glass of wine is merely a corroboration of Clark’s own view and a way of the rather less sensitive of us getting a little closer to his own experience.  It was a comment on process rather than a recommendation.

‘Kenneth Clark: Looking for Civilisation’  is at Tate Britain, until 10 August 2014