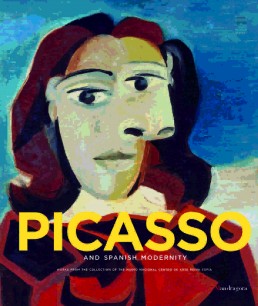 The connections between Picasso, Spain and modernism were recently explored in Florence – Clare Finn reports on the accompanying book

History has not been favourable to Spanish arts. The standard itinerary of the 18th century Grand Tour bypassed the Iberian peninsula, leading to a tendency to overlook Spain's arts in favour of those of Italy. Much later, Franco's repressive regime was not to aid their dissemination. It is therefore a great pleasure to see that Florence, the city most associated with the Italian Renaissance, recently hosted an exhibition devoted to ‘Picasso and Spanish Modernism’ drawn from the Museu Nacional Centro de Arte Reina Sofia in Madrid. This was held during the past winter in the Palazzo Strozzi. A lavish catalogue illustrating all 88 works by 36 artists and as many again additional images accompanied the show and allows us all to learn from it.

For its curator, Eugenio Carmona, Spanish modernism began in 1910, with the neo-classicism of Noucentisme, with its references to the Mediterranean and Catalonia, not with the earlier Catalan Moderniste movement. But while Picasso and his work formed a distinct feature of Spanish modernity, he himself was resident in France from 1904.

For Picasso’s patron, Gertrude Stein, Cubism was Spanish, invented by a Spaniard, capable of being practised only by Spaniards; for her, the Frenchman, Georges Braque, did not get a look in! Picasso and Cubism were present in all aspects of Spanish modernity. Modernist artists in Spain experienced a need to repossess, to re-adopt him, for them here was a Spaniard whose Cubism had changed all art and could, they felt, put Spanish arts on a world stage, since Cubism’s influence went far beyond France, indeed far beyond Europe.

While writing of Cubism's influence on Spanish artists, the author seems to assume that this was the Cubism of Picasso and Braque, which was little exhibited, rather than that of the Salon Cubists, Le Corbusier, Robert and Sonia Delauney  et al., which was shown far more widely. In fact, from 1926 the influence of Christian Zervos' magazine Cahier d'art, was paramount. A staunch supporter of Picasso, Zervos used his magazine to disseminate the artist’s work widely. Zervos was later the author of Picasso's catalogue raisonné.The current publication includes an appendix that reprints several influential texts as well as biographical notes on 35 of the artists, or groups, included in the show.

Another landmark was the 1927 translation of Franz Roh's book Nach-expressionism; Magischer Realismus: Probleme der neuesten EuropäischenMalerei, into Spanish. Discussing Picasso, Miró and other Spanish artists extensively, the book gave Spanish artists a means to express sensitivities they already had.

Specifically Spanish is the finding of modernity not in technology or mechanical advances but in the use of nature. For Spanish artists there was a character of authenticity linked to land, to landscape and peasants. Identifying the female nude with nature was typical of Mediterranean neo-classicism and of the so-called ‘New Objectivity’ with its dual arms of classicism and realism, and its wish to reveal the true chaos in life born of the First World War.

There would not, however, be a major exhibition of Picasso's work in Spain until 1936. Organized by the Amigos del Arte Nuevo (ADLAN), it travelled throughout Spain, stopped from reaching his birthplace, Malaga, only by the Civil War. Visitors poured in. Picasso and his art were their future. But then came the Civil War and Franco's regime, and like the couple in the painting The Bride and Groom by Antonio López (b.1936), art seems to have been trapped in another period of history.

Picasso's work approached this period through the symbolism of the mythical Minotaur of Greek legend, the bull the bullfights with which he was so familiar, and the image of the weeping woman. These elements can be seen in that most Spanish of subjects, Guernica, depicting a Spanish atrocity, painted for the Spanish democratically elected government that would ultimately lose to Franco's dictatorship.

Until one reaches the section on nature and culture, however, Carmona's meandering text, with his desire to encompass everything, fails to convey what is specifically Spanish in the work, or whether Spanish artists were producing work that could be said to be ‘European’. Writing on other Spanish artists active at this time, he writes that the artistic imagination of José Gutièrrez Solanda (1886–1945) would not have survived outside Spain and the situation was fairly similar for Daniel Vázquez Díaz (1882–1969).

There are confusing references to how the Spaniard Jorge Oteiza (1908–2003) drew on the Russian artist Malevich,  or the effect on Pablo Palazuelo (1916–2007) of seeing Paul Klee's   work and reflecting on that of Wassily Kandinsky.  All this falls into place only when Picasso’s hold on Spanish modernity wanes. In the post-war period Joan Miró  became a greater reference for the solutions of the present and with Antoni Tàpies’  painting a new era began.

But throughout clear threads can be seen, not least in the forged iron sculptures of Pablo Gargallo and Julia Gonzalez, with their roots deep in Spanish traditional metalwork, but that would lead on to the work of Martin Chirino, Eduardo Chillida and Jorge Oteiza. Here is modernist work that is very Spanish indeed.

Picasso and Spanish Modernity ON AMAZON

The exhibition ‘Picasso and Spanish Modernity: Works from the Collection of the Museo National Centro de Arte Reina Sofia’ was held at the  Palazzo Strozzi, Florence, 20 September 2014–25 January 2015.

See other articles and reviews about Picasso in Cassone:
‘Picasso the Great flatterer of 20th-century painting’, November 2013
‘A year in the life of…Picasso’, April 2013
‘Roll up, roll up – the circus in French art’, December 2012
‘Picasso’s homage to classical Greek art: The Vollard Suite’, June 2012