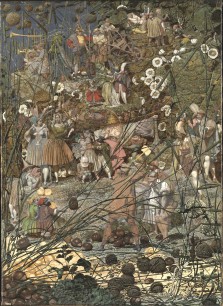 A murderer who spent most of his adult life in secure mental hospitals, Richard Dadd is one of Britain’s most unusual artists

Clare Finn explores his work at an exhibition at the Watts Gallery, near Guildford

Richard Dadd’s The Fairy Feller's Master-Stroke is among Tate Britain's most popular paintings, with its minutely observed characters standing among beautifully rendered grasses, tall as trees. Such detail might lead one to suppose his background was in botanical illustration or some such discipline, that is if one did not know that, in 1843, at the age of 26 Dadd (1817–86) murdered his father. He spent the rest of his life in two of England's  most famous lunatic asylums, the Bethlem Hospital, more commonly called 'Bedlam', and Broadmoor, where he died more than 40 years later.

Interestingly Dadd was not particularly notorious in his lifetime. Popular interest in him really grew from the late 1960s and 1970 coloured by Romantic ideas of creativity and madness. But Dadd's art stands apart, not just for his crime, but for another feature. Once he entered Bedlam he was no longer part of the art world. Prior to the murder he certainly was. He had an established reputation as an artist dedicated to creating works of the imagination, often drawn from Shakespeare. While not a Royal Academician he exhibited there at the annual Salon, was part of a group of artists called the Clique, among them Augustus Egg, Henry Nelson O'Neil and his friend William Powell Frith.

In 1842–3 he went on a tour of Europe and the Near East with Sir Thomas Philips, as the latter’s gentleman companion and draughtsman. Despite the breakneck pace Philips set for the tour, which made Dadd observe it was difficult to sketch from the back of a horse, he produced paintings and drawings that made him part of British art's Orientalist movement and he would draw on the sketches he did on those travels for the rest of his life.

Signs that all was not well with him began to show on the return leg of this journey and culminated on his return in the murder of his father, which led to his incarceration, in 1844. He was categorized as a 'dangerous' criminal under the care of the Home Office for the rest of his life. It was in Bedlam that he painted his two best-known works Contradiction, Oberon and Titania and The Fairy Feller's Master Stroke, both on display in the present exhibition. The former, Contradiction,was painted for Bedlam's first resident Physician-Superintendent, William Hood. The Fairy Feller, which remains unfinished, was done for George Haydon, Bedlam's steward. So his physicians were also his patrons. Much of Dadd’s art remained in the asylums or with their staff: Hood built a collection. Other pieces, such as Halt in the Desert, entered the art market although how is not entirely clear.

Dadd’s real popularity, like that of many Victorian painters, did not come until the 20th century. Michael Foucault and the anti-psychiatry movement played their part, but his painting in Bedlam and Broadmoor should not be seen as a form of art therapy. Ideas that 'suppressed autobiography' might be mined in this way were not current until the 1940s, when psycho-analysis and Surrealism became familiar.

The current fascinating show exhibits Dadd’s whole range of meticulous work from his Puck, shown at the Society of British Artists in 1841, orientalist pieces, his travelling companion, Philips,in Thomas Philips Reclining in Turkish Costume, painted before his crime and his Halt in the Desert painted after that in 1845. There are stunningly delicate images and his series of the passions done in Bedlam and Broadmoor, on loan from the Bethlem Museum of the Mind. These wre all works he made without the aid of models. We know Dadd created them with only his imagination, an imagination that that did not dim through his incarceration but through which he produced richly detailed work.

Given that Dadd is one of Britain’s best-known Victorian artists, it is a surprise to learn there is not much serious literature devoted to him. There is the catalogue of the 1974 Tate show and, importantly, there is Nicholas Troman’s book Richard Dadd; The Artist and the Asylum published in 2011. Tromans is curator at the Watts Gallery where the current exhibition ‘The Art of Bedlam: Richard Dadd’is being shown.

For those that do not yet know it, the Watts Gallery is a delight. It is situated in Compton, near Guildford, Surrey, where the Victorian painter and sculptor George Frederic Wattslived, with his wife, the artist Mary Fraser-Tytler, from 1891. Dedicated to Watts’ work, it is the only gallery in Britain devoted to a single artist. Its top-lit gallery was built by the architect Christopher Hatton Turnor, an admirer of Edwin Lutyens and C. F. A. Voysey, under the inspiration of the Arts and Crafts movement. It is well worth a visit and has thoughtful temporary exhibitions like this one on Dadd.

Richard Dadd: The Artist and the Asylum

‘The Art of Bedlam: Richard Dadd’, is at the Watts Gallery, http://www.wattsgallery.org.uk  Down Lane, Compton GU3 1DQ, near Guildford, Surrey, now on until 1 November 2015.

Visitors to the Watts Gallery should not miss the Watts Chapel, nearby. This unusual and richly decorated building was designed by Mary Fraser-Tytler Watts and decorated by her with the help of students recruited locally and trained by her in various art and craft techniques. It is also possible to tour the house, Limnerslease, nearby, where the two artists lived, again featuring much unique decoration by Mary.
Read more about the Watts Gallery in Cassone, December 2011