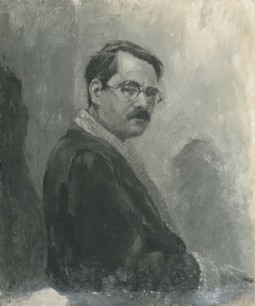 Sir Robert Vere ‘Robin’ Darwin was a British artist and Rector of the Royal College of Art.Beth Williamson reviews a new book on his life and career

As a young man  Darwin betrayed a ‘relaxed attitude’ to academic commitment. He abandoned Cambridge, and then repeated this at the Slade; it’s hard to imagine how he later became such a longstanding figure at the RCA. The snippets of archival material letters exchanged with artist Julian Trevelyan give a fascinating insight into their friendship as well as the everyday struggles of all artists to survive financially whilst building a reputation and practice.

One of the most interesting chapters examines Darwin’s experience of wartime Britain when he joined the Civil Deference Camouflage Establishment. Separate from the register of official War Artists, the Camouflage Establishment maintained a register of artists and designers who could contribute to special wartime work of camouflage, propaganda and publicity. Amongst those working on camouflage were painters Thomas Monnington, designer Richard Guyatt, sculptor Leon Underwood and  Basil Spence, architect of Coventry Cathedral. Darwin joined this list of distinguished figures.

Goodden suggests that Darwin’s involvement with the Council for Industrial Design, newly established in 1945, and other pressures on his time, may have affected his painting style. With little time to paint his style became ‘looser and more impressionistic’. His arrival at the Royal College of Art in 1948 is recorded in his later lecture ‘The Dodo and the Phoenix’ and as Principal he set about transforming the College: new staff, new administrative structures and eventually new accommodation.

Fascinating tales of the Senior Common Room and Darwin’s love of good food abound in this chapter and we get a sense of just how far his influence reached, far beyond teaching and into every aspect of College life. His support for young emerging artists, for instance, was cemented when a chance meeting with Madeleine Grand resulted in the New Arts Centre, with Darwin as trustee, and a supporting panel including John Rothenstein, Kenneth Clark   and William Coldstream.

There is so much detail in this book, especially in the chapters that deal with Darwin’s long tenure at the Royal College of Art. It is impossible to give an account of those important years in a sentence or two here since, as Gooden notes, the RCA remains his masterpiece. Perhaps the best suggestion I can make is to read the book slowly and to do so twice: savour the detail.

This biography is written in a clear and accessible manner. It conveys a sense of Darwin himself, ‘his distinctive mix of bombast, sensitivity and shyness’, as Christopher Frayling says in his short introduction. The book has been thoroughly researched (just look at the list of archives consulted) and might act as an initial point of reference for the reader with a broad general interest in art as well as the reader with more scholarly concerns.

The book proceeds chronologically, as you would expect from a biography, and initial chapters on Darwin’s family background, childhood, school days and marriage, act to ground the book and give the reader a strong sense of his early intellectual formation as well as how his key concerns developed. This close focus on particular periods in his early life, along with engaging archival photographs and early paintings by Darwin, is informative and works well to prepare the reader for the events that unfold in subsequent chapters.

We have here a much-needed introduction to the life of Robin Darwin, something notably absent from the array of current publications on mid-20th-century British artists, educators, historians and critics. Where Darwin is known, it tends to be for his significant contribution to art education, particularly in his role as Rector at the Royal College of Art (RCA) in London from 1948 until 1971.  Robin Darwin: Visionary Educator and Painter exceeds this, taking the reader back in time to share something of the formative influences of his childhood and his own development as an accomplished painter.

Readers in the US will be able to purchase a copy from The University of Chicago Press from August at the price of $45.