The troubled life and sublime work of Pierre-Paul Prud'hon 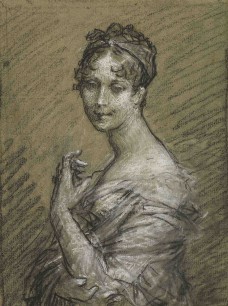 Prud'hon was the favourite painter of Napoleon and Josephine - has he been somwhat neglected since then?

‘Rediscovering Old Masters: the Melosi Series’ is the sub-title of Dulwich Picture Gallery’s latest exhibition ‘Prud’hon: Napoleon’s Draughtsman’. The series’ aim is to introduce overlooked or forgotten artists and this year, for the first time in the UK, a selection of drawings by French artist Pierre-Paul Prud’hon (1758–1823), is on loan from the Musée Baron, Gray, France. This is a timely exhibition in the year that Britain commemorates the bicentenary of the Battle of Waterloo. It aims to reveal Prud’hon, a favourite artist of Bonaparte, well known in France and deserving greater recognition.

The artist is best known for portraits of striking naturalism. He was called ‘the French Correggio’ and one can see influence of Antonio da Correggio, Michelangelo, and Leonardo da Vinci’s sfumato technique, which Prud’hon studied in Rome. He was the favourite court artist of Emperor Napoléon Bonaparte and Empress Joséphine. From 1801 he was commissioned to paint allegorical works, ceiling paintings, and portraits. He was also employed as the Empress’ drawing teacher.

At her home, Château de Malmaison, on the outskirts of Paris, Joséphine sat for Prud’hon 15 times.  Study for a Portrait of Joséphine Bonaparte, c. 1805, and Study for a portrait of Joséphine seated, c.1805– both in the exhibition – imbue romantic, informal portrayals of a beautiful woman, full of charm, poise, elegance and refinement. Prud’hon’s style was a fusion of Neo-Classical and Romanticism. The studies follow on from the 1804 coronation, a time when the Bonaparte marriage was in decline due to lack of an heir. The painted portraits now hang in the Louvre, Empress Joséphine, and Empress Joséphine in the park at Malmaison, were completed in 1809 (Napoleon divorced the Empress in 1809-10). Joséphine is quoted as saying that the Prud’hon portraits were ‘more the work of a friend than a painter’.

Pierre Prudon (birth name), was born in Burgundy, the tenth son of a stonecutter. He was talent-spotted as a budding artist by his local Bishop, who sponsored him at the age of 16 at the newly established École des Beaux-Arts in Dijon. He changed his name from Pierre Prudon to Pierre-Paul Prud’hon, in honour of the Flemish artist Peter Paul Rubens and added an apostrophe plus ‘h’ to his surname to elevate his social status. Following the award of the Dijon Prix de Rome in 1784 he lived in Rome for four years, a reclusive man, enrolling at a drawing school but avoiding the painting workshops in order to retain his own style. His view was ‘I cannot nor do I want to see through the eyes of others…’

Prud’hon’s personal life was complex. His wife was committed to an asylum (allegedly for an insult to Empress Joséphine), and Prud’hon, legally separated but not allowed to divorce, was given charge of his children. He formed a close relationship with his first student, Constance Mayer (1775–1821), who became his social and domestic support. She is recognized as a gifted painter who regularly collaborated with Prud’hon on his painted commissions. They shared a studio in the Sorbonne for many years. On news of the pending death of Prud’hon’s wife, Mayer expected marriage; Prud’hon did not wish it and Mayer, in despair, committed suicide in their studio, using Prud’hon’s razor.

Her action left Prud’hon a broken man, which led to his death two years after Meyer.  One of Prud’hon’s final paintings, the unfinished Christ on the Cross, 1822 (Musée du Louvre), imbues a sense of intense emotion in the harrowing figure of Christ, a reflection perhaps on Prud’hon’s shattered life.

In the Dulwich Gallery exhibition it is the life drawings that reveal the superb skill that created Prud’hon’s reputation, recognized by many, including Charles Baudelaire, and Eugene Delacroix whose account of Prud’hon’s life and work was published in 1846. His drawings, in trademark black and white chalk on blue printed paper, have an ethereal quality, visible in many examples, such as Paris, Prince of Troy, c. 1800. On loan from the British Museum Standing Female Nude, c.1810–20, highlights the artist’s close attention to form and shadow, also visible in the beautiful Seated Male Nude, c.1810–20.

The exhibition, on until 15 November, is included in the entrance fee to Dulwich Picture Gallery.