A profound experience of vision - the work of David Tress 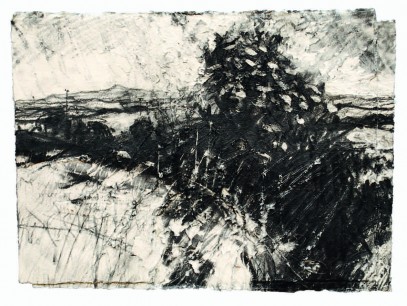 Heading for Ireland around the end of the 1990s, aiming to at least attempt to paint the extraordinary, dramatic limestone heave of the landscape of West Cork, I found the West Wales Arts Centre, and an exhibition of works by David Tress. The energy and immediacy of his expressionist technique – his graphite drawings, his paintings of Connemara, the torn and scarified surfaces of both – were mesmerizing. This was work so visceral as to command pursuit.

That’s the way it felt, and the way it still feels. Andrew Lambirth’s full-scale biography tells it that way too, a lovely production by The Studio, with a text that stays on the right side of bias, yet declares its author’s total absorption with his subject. The last year has been good for books by Lambirth, but it is difficult to see any offering from him in the immediate future bettering David Tress for the honesty born of affinity that marks it.

This is a book is for art lovers who not only love painting and drawing and mark-making, but also love the gut-churning responses that so often result just from being in the British landscape, and from its being around oneself, here and now and – by extension – long ago. It is beautifully produced (Lambirth’s publishers are always ‘quality’), and lavishly and lovingly illustrated, and it brings the artist’s output up to date. At a recent A level moderation for Art and Design at a Sussex school, I spotted a familiar image: one of the candidates had decided to use Tress as exemplar material, alongside John Piper,  with transcription images from the former’s exhibition catalogue Chasing Sublime Light (2008). There is nothing ephemeral about Tress: when he doesn’t like what he has done, he doesn’t set it aside: he throws it away. That’s deliberate.

David Tress offers aficionados of all sorts an exceptional opportunity to enlarge their understanding of the many ways to approach and engage with the artist’s work, and perhaps also to further their thinking about expressionist painting, and its application to natural themes. Few British painters have come near to equal this artist’s determined stance, and Andrew Lambirth knows this.

In nine chapters, Lambirth writes the artist’s biography and describes his early years as a conceptual artist, before his move to Pembrokeshire in 1976. His exhibiting history is covered, together with his very carefully considered ideas about drawing. There are other artists in England today whose work might be compared to that of David Tress, but few whose drawing can match him, and there is an argument that his muscular approach to that medium is envied. When others speak disparagingly of an artist who slashes, cuts and strips away jagged layers of heavyweight paper, loaded with graphite and other drawing marks, and still the immediacy and profound experience of the vision remains, you sense that respect is in the air, even if the word is never uttered. Lambirth understands this, when he talks about some of the drawings as ‘collecting activity’: it isn’t simply the lines, marks or striations, that make the pictures what they are, but the information Tress stores in his pictorial baggage, rather less a sack, and rather more an entire caravan.

In one seam of his commentary, Lambirth offers a list of the deepest influences on Tress. They comprise a pantheon of the English greats, including John Constable,  J.M.W. Turner,  Cotman, Ivon Hitchens, David Bomberg and John Piper – my random and not especially indicative selection. This may suggest something of the sweep of the artist’s backward vision, but his forward thinking has taken his work in wholly different directions, as In Pursuit of Sublime Light clearly showed, and Tress has not ceased to move onwards. There is nothing especially literal in his respect for the artists of the past, and, to quote Lambirth quoting himself in 2011, ‘…[Tress] doesn’t take the obvious path to painting landscape, but looks at it afresh and identifies those elements that most interest him’.

This is an essential characteristic of his practice as an artist, and lies at the heart of much of what has come to be identifiable about his style, not least of which is the evident ‘attack’ on every picture surface. And ‘attack’ is a term resonant of jazz energy as much as it is about the rules of pictorial engagement being reconfigured in the artist’s Haverfordwest studio. It is not especially surprising to learn that as a student Tress played the saxophone, not very well, if he is to be believed, but in this book the fact is somehow material to his growth as an artist. Just as one doesn’t dally with a horn, so one must find other ways to express all manner of truths, and Lambirth’s assembled texts are an absorbing series of questions and revelations, some of them call-and-response, in which their subject’s layers, like his pictures, are removed and adjusted to present not one, but many different forms of expression.

Not the least of these is the artist’s own writing, in a range of forms, which might most easily be termed ‘questing’, for its unceasing search for the next answer. It chips away at long-established problems that have ever confounded anyone imbued with any streak of creativity, in whatever medium. But enough: simply put, Lambirth on Tress is best read by you, and not paraphrased by me. It is as good a book about a contemporary artist as you are likely to find in print for some time to come.

The publication of David Tress coincides with the artist’s 60th birthday, and a recent exhibition in London at Messum’s. Andrew Lambirth wrote a brief introduction to the Messum catalogue (a very strong vehicle for the artist’s work, especially in the last two years, and excellent value for money at £15), but the book reviewed on this page is the most complete assessment of his career in print.