Another side to Picasso 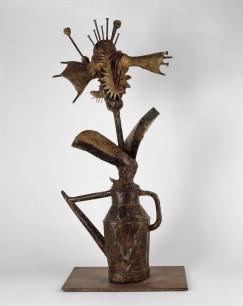 Picasso’s gifts as a sculptor were not fully recognized until the 1960s but as Stephen Bury shows, they are displayed to great advantage in MoMA’s exhibition

In their well-judged introduction to the catalogue, curators Temkin and Umland quote the critic, Hilton Kramer, on the 1967 Picasso sculpture exhibition: ‘[it] persuades us for the first time that Picasso [1881–1973] would have to be considered one of the great artists of the century even if he had never painted a single picture’. The 2015 exhibition, occupies the whole of the fourth floor of MoMA, allowing enough space for the sculptures to be seen in the round. Unusually for a Picasso exhibition, the works can be photographed by the public. The aim is to show the work as a distinct oeuvre apart from the painting. In only one wall text, in the first section, is the visitor encouraged to see the elsewhere-visible Les Demoiselles d’Avignon (1907) in the context of Picasso’s blocky ‘primitivist’ wooden sculptures, such as Doll (1907), which itself has traces of paint and gesso.

But of course there is no neat divide between Picasso’s sculpture and painting. In the Boisgeloup Studio series ‘Seated/Standing Woman’ he used discarded fir painting stretchers, whilst Composition with Glove and Object with Palm Leaf, both from 1930, feature a grisaille three-dimensional still-life on the back of a stretched canvas. Still Life (The Snack) (1914) hovers in between painting and sculpture: its cubist glass is nailed to the wall as if it is part of a picture hanging on a wall, whilst the decorative fringe of the table edge juts into the viewer’s space as if it is a real object: the peppercorns of the salami are in fact black-painted nail heads, re-inscribing the play of illusion and the real, the literal and the figurative. As the curators point out, this was one of the few non-editioned sculptures that Picasso parted with in his lifetime – it was owned by the poet Paul Eluard and then by the British surrealist and biographer of Picasso, Roland Penrose,  before entering the Tate’s collection.

And you can look at the ceramics made at the Ramiés’ Madoura workshop in Vallauris as painting on three-dimensional objects. This also would apply to the sheet-metal work manufactured for Picasso by Lionel Prejger in the 1950s and early 1960s. This exhibition downplays the ceramics – there are far fewer than in the 1967 show, which included 32. It also excludes Picasso’s theatre/costume designs: there would be a good case for including the American Manager Costume for Erik Satie and Jean Cocteau’s ballet Parade (1917). Temkin and Umland argue curiously that ‘despite the garments’ Cubist syntax, constructed volumes, and heterogeneous materiality, [they] were made to come alive only when they were worn and moved about in onstage amid music and dance’. And of course paintings and sculpture were exhibited together: Guernica  was ‘guarded’ by cement versions of Head of a Woman (1932) and Woman with Vase (1933) outside the 1937 Pavilion of the Spanish Republic.

But perhaps the biggest difference between the 1967 and 2015 exhibitions is the curator’s promotion of the original form of the object rather than the bronze cast. It is hard to determine what Picasso felt about the creation of bronzes. During the German occupation making sculpture in the converted bathroom of his house at 7 rue des Grand-Augustins and secretly transporting by night to be cast in bronze was an act of resistance, as the metal was regarded as war material.  It’s possible that Picasso regarded the original work was a maquette to be replaced by the transportable and more commercial bronze. And Picasso ‘personalized’ some of the bronzes by painting them. But he did keep and treasure the originals, which were rarely lent before his death.

On show are six wonderful copies of the Glass of Absinthe (1914), all with a perforated white metal absinthe spoon and variant oil paint, including one incorporating sand, editioned by Picasso’s dealer Kahnweiler. They stand in contradistinction to the works that have survived only in photographs, like the four ‘nature-morte’ photographs taken by Kahnweiler’s photographer, Émile Delétang, for issue 18 (November 15, 1913) of Les Soirées de Paris, which probably influenced the Russian sculptor Vladimir Tatlin.

Picasso’s engagement with sculpture is termed by the curators as ‘episodic’, dependent on the availability of tools, materials, techniques, and a muse – whether Fernande, Eva, Olga, Marie-Thérèse, Dora, Françoise, Genevieve or Jacqueline – and technical help – whether from  Gonzalez, the Ramiés or Prejger – as well as studio space. He had to give up the Boisgeloup property and studio in 1936 as part of the divorce settlement with his first wife, Olga. But these do not entirely explain the three periods of sculptural ‘inactivity’ – 1909–12, 1915–27 and 1937–9, if they were indeed  inactive, as such activities of engraving a pebble or creating the plaster Apple (1909), a homage to Cézanne,   required not much equipment or space: perhaps the issues of dating and the survival of objects over time are the real problems here.

Both the exhibition and catalogue usefully pursue a chronological approach that is helpful to the visitor and researcher. In the exhibition, however, one has to walk through the late sheet metal work before following the chronological layout. Again, I commend the museum for deliberately under-doing the labels, which lets the work speak for itself: there is a paper guide with silhouettes of the objects – this works when you approach the sculpture from the right side. This is a must-see exhibition, and even those who had the opportunity to visit the 1967 show will here see a new, refreshing approach to Picasso’s sculpture.

‘Picasso Sculpture’ is at the Museum of Modern Art, New York until 7 February 2016.