Durand-Ruel, the art dealer behind the Impressionists 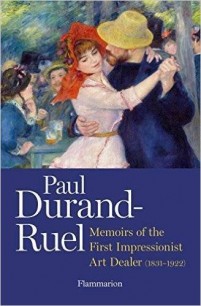 Paul Durand-Ruel is the art dealer most associated with the Impressionists. His memoirs reveal a complex character and a very astute businessman

Paul Durand-Ruel’s father had a stationer’s shop which expanded into art materials and picture sales. The son began working in his father’s art gallery around 1856 and began showing Barbizon School paintings in the 1860s, alongside old masters and academic paintings and prints. In 1871 he began buying paintings by Pissarro and Monet, expanding the following year into Courbet, Manet, Degas, Sisley and Renoir.

At that point he ran into financial problems  and it took until 1880 for him to resume buying from the Impressionists. Thereafter he supported their work massively, presenting it in solo shows, and generally tried to corner the market in their work as other dealers began to compete for it. His network of galleries, especially in the USA, and his practice of buying back in, meant that thousands of Impressionist works passed through his hands, including hundreds that are now in the best European and American permanent collections.

Some time before 1911, Durand-Ruel (1831–1922) sat down to write his memoirs. Now these memoirs have been translated into English  with some added excerpts from a 1912 second version of the memoirs which continued the dealer’s life-story from 1875–87 and with the addition of illustrations, selected letters by and to the dealer, contemporary assessments of the dealer, and a list of exhibitions which he organized.

The memoirs are edited by the dealer’s descendants Paul-Louis and Flavie Durand-Ruel, who manage the Durand-Ruel Archives, successor to the gallery itself, which closed in 1974. Their introduction usefully lists what they call his key ‘innovative principles’ as a dealer which ‘laid the foundations for the international art market of today’. He agreed to pay monthly stipends in return for first refusal on work. He gave public access to his apartment ‘collection’ as a marketing tool to encourage appreciation and purchase. His intimate involvement with the artists whom he represented included paying their bills directly. He had complicated deals and partnerships with other dealers and located his galleries in glamorous districts, developing an international network (of which the New York gallery was the most important).

Durand-Ruel’s ability to find investment and financial backing for purchases and operating costs was a key to his success, as was  his use of one-person exhibitions to reinforce the perception of an individual artist’s oeuvre. He also briefly promoted art journals to pump-prime interest and create a favourable critical press, together with publishing 30 catalogue instalments of paintings in which he was trading.

The authors could perhaps have gone further and added to all this Durand-Ruel’s strategies of buying in works to raise prices for the future and of aiming to monopolize representation of an artist. He traded in commercially popular works in order to speculate long-term on artworks not currently appreciated or bought, and thereby achieved a higher long-term profit. As an example of this last point, in 1883 Durand-Ruel wrote to Monet saying that he was sending him some money from a Bouguereau sale, stating that ‘I must sell bad painting in order to live and help my friends live’.

Durand-Ruel always presented Impressionism as part of a stylistic continuity with Barbizon and earlier landscape art, based upon a selective formal analysis (focused upon light, typically). Durand-Ruel’s gallery actually went on playing a major part after his death in establishing a certain art history of Impressionism, part-funding the publication of John Rewald’s major 1946 book, Histoire de l’impressionisme. In this tradition of interpretation (part of a wider ideological force-field), the formal theme of light-analysis was foregrounded at the expense of the bundle of more rebarbative avant-garde attitudes and stances symbolically encapsulated in its practices.

We know from the memoirs that Durand-Ruel sought the sort of State recognition that Courbet had refused in 1870 and that Monet refused in 1890 (the Legion of Honour) and 1920 (membership of the Académie des Beaux-Arts). As a staunch Catholic, Durand-Ruel was opposed to the Third Republic’s commitment to removing church control of education and in 1880 he ran an art auction to raise money to set up independent Catholic faith-schools . So perhaps the fact that he was refused the Legion of Honour is not surprising. In his memoirs, the monarchist Durand-Ruel, who always talked about ‘the ignorant, presumptuous masses’, speaks of Impressionism significantly in terms of its ‘refined, delicate visions of nature’. He would have read that artistic taste as elitist and opposed to the culture of the masses. The Impressionists’ sense of themselves, by contrast, always had a subtext of social progressivism. Durand-Ruel maintained a cultural progressivism, but one deliberately blind to any social progressivism on the artists’ part, embodied either in their motifs or else in their stances towards them.

This book is to be welcomed by all Impressionist scholars and anyone with a general interest in art dealing, though perhaps the general reader should be warned that, in places, the memoirs descend to a list of works bought or sold plus prices. Its republication coincides with a major touring exhibition devoted to Durand-Ruel’s backing of Impressionism which is reviewed in ‘Around the Galleries’ in this issue.