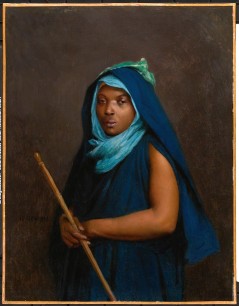 A book for everyone interested in French portraiture, Orientalist and Salon painting, says Alexander Adams

Nineteenth-Century Art: Highlights from the Tanenbaum Collection at the Art Gallery of Hamilton by Alison McQueen

In 2002 art collectors Joey and Toby Tanenbaum announced the donation of over 200 works of art by European artists to the Art Gallery of Hamilton, Ontario (AGH). The collection, built up over many years by the private collectors, features many of the best French artists of the period, including Alexandre Cabanel, Aphonse Monticelli and Jean-Léon Gérôme, with a handful of non-French artists.

There is no Impressionism or Symbolism and relatively little Romantic art. The bulk of the work is academic History and Salon painting, with many portraits, representing the mainstream art of the era. The sculptures are by especially noteworthy, including artists Jean-Antoine Houdon, Jean-Baptiste Carpeaux, Medardo Rosso, Jef Lambeaux and Constantin Meunier. The Tanenbaums’ donation transformed AGH’s holdings, making made AGH a major centre in Canada for the study of French painting. This newly published catalogue documents the most significant items of the donation.

The bigger names are largely represented by bagatelles and are not where the heart of the collection resides. The paintings by Puvis de Chavannes (an artist much admired by Seurat), Jaques-Émile Blanche, Forain and so forth are all slight pieces. A painting by British artist Frank Brangwyn (1874–1956) is technically ambitious and displays a lot of panache (perhaps too much) but remains an ugly painting. Nonetheless, because they are reproduced full page and given entries with bibliographies, provenances and literature references, the discussions of such items constitute useful insights into minor parts of major artists’ work. There are a number of duds, mainly by justly obscure hacks. Happily, there are many unexpected treasures.

There are oddities, such as Gustave Doré’s paintings of religious subjects. Doré (1932–83) is best known today as an illustrator of classic literature but he was acclaimed in his lifetime as a painter along the lines of a Cecil B. de Mille, animating vast biblical scenes with a multitude of figures and dramatic lighting effects. That Salon tradition was moribund even by Doré’s day.

There are real gems in the collection. For example, a scintillating pastel of a draped woman by Albert Moore has much more vitality and energy than his oil paintings. The energetic handling and openness (with much of the underlying prepared canvas and preparatory work showing through) makes the picture more interesting to look at than his rather airless paintings. There is a shadowy, brooding head of a woman by Eugene Carrière (1849–1906), painted in monochrome. There are several uncanny religious paintings by Jean-Jacques Henner (1829–1905), an artist who specialized in religious scenes featuring nudes.

Two of the most vibrant portraits in the Tanenbaum collection are by women. Toklihili: The Young Indian Princess (c. 1863–71) by French painter Sophie Anderson (1823–1903) shows a non-European model in exotic costume. It is the realistic depiction of the face that is the most enlivening part of the painting. A beautifully executed Portrait of a Woman (1882) shows a woman’s head glowing with life, set against a grey background. It was painted by Ukrainian painter Mariya Bashkirtseva (aka Marie Bashkirtseff) (1858–84). Bashkirtseva moved to Paris to train at Academie Julian and was becoming recognized for her talent when she died of tuberculosis at the age of 25. It seems a great loss considering how ably she had already mastered the language of realism whilst retaining a lightness of touch. She – like Akseli Gallen-Kallela (1865–1931) and many others – followed the idiom of Jules Bastien-Lepage, who dominated French conceptions of realism in the late 19th century, with his scenes of rural life painted in muted half-tones. Bashkirtseva’s diaries were published posthumously and are still in print.

Sometimes events in the news coincide with reviews in a fortunate manner. The vast academic painting Christ before Pilate (1881) by Mihály Munkácsy (1844–1900), which was part of the Tannenbaum donation and documented in this catalogue, was sold by the AGH to the Hungarian government for US$5.7 million in May 2015. The painting is part of a trio of related masterpieces by Munkácsy, considered Hungary’s most important painter. The other two pictures were already in Hungary and this acquisition completes the set. AGH considered that the painting was so important to Hungary’s cultural life that it made the exceptional decision to deaccession.

Orientalist subjects play a large part in the collection and as such fairly reflect the production of Salon painters in France. A technically dazzling polychromed bronze bust of a Chinese man by Charles Cordier (1827–1905) gives us a taste of how the Orient was portrayed in Europe. Orientalists often went to great lengths to make their art accurate, whilst at the same time conforming to expectations. A striking Portrait of an Arab (c. 1880–90) by Nicola Forcella (before 1868–after 1906) displays talent and patience, as well as a dash of brio in the palette-knifed plasterwork. The Italian painter lived in Cairo, where he taught at the school of applied arts. His life and work do not seem well documented and it might reward a diligent researcher to find out more about his art.

Alfred Dehodencq’s dramatic historical tableau Execution of a Jewish Woman in Morocco (c. 1861), which a few years ago might have looked like a piece of anachronistic sensationalism, today – in the light of massacres of non-Muslims by Islamists in Syria and Iraq – seems chillingly relevant.

This volume is a useful contribution to the study of French academicism, portraiture and Orientalist and Salon painting during the 19th century and is highly recommended for anyone interested in these subjects.

Highlights from the Tanenbaum Collection